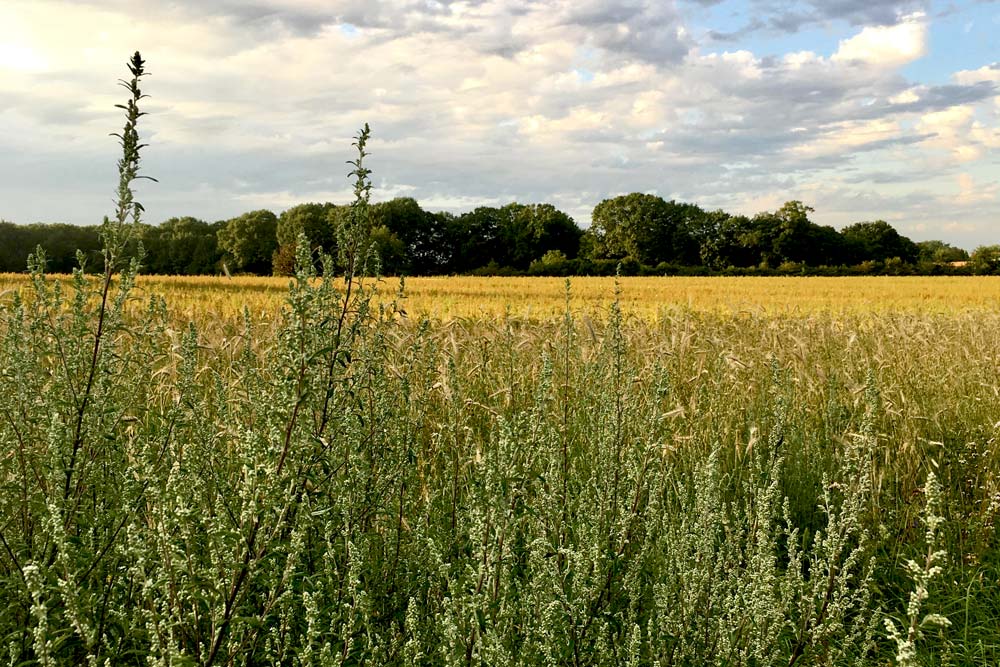 It is midsummer and Mugwort plants are in full bloom, as we hear from Jaco van Wezel (Weeronline) and Arnold van Vliet (Wageningen University). The peak period continues until August 11; the Mugwort pollen season is over by the end of August.
Summer is very nice, but for people with hay fever, it is an endless marathon. Hay fever is a form of allergy, with unpleasant symptoms. You can read more about it in this article from Wageningen University; we highlight a (translated) part of it here:

Allergy is a disease that is partly hereditary and in which the environment is important to express the hereditary predisposition. In allergy, the immune system reacts not only to harmful invaders, but also to harmless substances in your diet, such as wheat gluten, and in the air you breathe, such as pollen from grasses or birch trees and dust mite particles. The damage in the body is not caused by the penetrating substance, but by the excessive reaction of the own immune system.

The pollen that cause hay fever comes from different types of plants. Some pollen are even smaller than 6 µm and easily penetrate our houses, even with the windows closed. They are harmless in themselves, but they do alarm the immune systems of people with hay fever. This increases the risk that this will develop into asthma at a later stage in your life. This is also known as the “allergic march”. The HEPASmart filter of the BRISE air purifier ensures that pollen and polluting organisms such as bacteria are effectively filtered out of the air.

In the meantime, BRISE has added a new filter to its range: the BRISE Bio filter that provides even more protection, especially now in corona times. The Bio filter is a new type of pre-filter, with only ‘AMS cleaning elements’ and the main active ingredient is chlorine dioxide. This material has been classified by the World Health Organization (WHO) as the safest sterilization ingredient, with an elimination rate of more than 98% on viruses and bacteria. Thanks to the exclusive nanofilm packaging technology, BRISE is able to release this element slowly over three months.

If you use hay fever medications, they can reduce the symptoms of hay fever, but it is at least as important to remove the pollen from your home. It is advisable, if you have been outside, to change clothes when you return home and to have the air purifier already on. Switch on the BRISE air purifier at least an hour before returning home, so that the pollen in the house is already filtered out of the air. This can be done very conveniently, remotely with the BRISE app, for example when you are on the way home. This way you keep your house free from pollen and any other disruptive substances, and you ultimately need less medication.